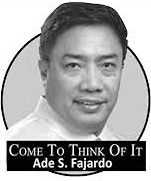 The caption of the quo warranto petition filed by the Office of the Solicitor General against television network ABS-CBN reads, “Republic of the Philippines, represented by Solicitor General Jose C. Calida, petitioner, versus ABS-CBN Corporation and ABS-CBN Convergence, Inc., respondents.”

The Solicitor General is thus representing himself to be representing the Republic in the action against ABS-CBN.

The Republic, when it comes to Court, acts like any other body corporate or individual that has capacity to sue, and in most cases, be sued in return. In such actions, the Solicitor General appears as counsel for the government, and not as counsel and client at the same time. The Solicitor General, obviously, is not the Republic. That is, in the normal course of things.

Chief Presidential attorney Salvador Panelo has consistently and publicly disclaimed any kind of prompting from his boss – the President of the Republic. His denial is unequivocal – the President definitely has nothing to do with the filing of the quo warranto petition versus ABS CBN.

If the filing does not proceed from any Presidential directive, who then is the client of the Solicitor General in this case?

Lawyers practice civil procedure guided by the Rules of Court approved by the Supreme Court. Under the Rules, there are three situations when the Solicitor General may file suit for quo warranto: (1) when directed by the President; (2) upon complaint; or (3) when he has good reason to believe that a case for quo warranto can be established by proof.

As pointed out, the government has been consistent in denying presidential imprimatur behind the Solicitor General’s initiative to file the suit for quo warranto against ABS CBN. There is also no indication that he is acting upon the formal complaint of someone like Atty. Mallari of Pampanga who, as we recall, is credited with lodging a complaint with the Office of the Solicitor General against Ma. Lourdes Sereno as an anterior step towards the quo warranto action against the then sitting Chief Justice.

The Solicitor General may thus be filing suit under the third instance cited by the rules, i.e., the existence of a good reason to believe that a case for quo warranto can be established by proof. There are no clear elements by which to anchor such actions, but one thing is clear – this obscure provision in the rules accords the Solicitor General enough leeway to determine that an action for quo warranto should be commenced.

We say “obscure” because the remedy is like a mine that has never been detonated until now. Lawyers routinely avail of quo warranto for clients who claim that their opponents are not entitled to the positions they are holding. Hundreds of such cases have been filed, tried, and decided under our court system. But quo warranto against a broadcast franchise holder upon the sole effort of the Solicitor General is practically uncharted territory in our jurisdiction.

The relevant question therefore is – why wield the weapon now? And against an institution that has the loudest voice and which the President has pilloried since the advent of his administration?

For the case to prosper, it must be shown that there exists “good reason to believe that a case for quo warranto can be established by proof.” That would require an examination of pieces of evidence that show violations of the franchise. Normally, that is not the function of the Supreme Court because it is not a trier of facts. The Supreme Court decides cases based on the law and the facts established elsewhere – like in trial courts where parties to a case have the luxury of a full-blown trial.

In this case, evaluation of evidence of wrongdoing is the function of the House of Representatives that is mandated to hold hearings and assess the possible renewal of the fast expiring ABS CBN franchise. Unfortunately, and until the mood changes, the House leadership appears bent on hearing the matter after the franchise shall have expired.

Many of us thought it foolhardy that the Solicitor General should petition the Supreme Court at a time when the franchise was up for renewal anyway. We sought method to this apparent madness.

But putting it in the context of unfolding events, like the National Telecommunications Commission itself not knowing whether it has the power to allow the broadcast giant to continue operating sans an existing franchise, and it waiting for the Department of Justice to opine one way or the other, or possibly deferring to the judgment of the Court should this lacuna be made an incident in the ongoing case, there is now reason to extol the Solicitor General as the consummate legal tactician who has consigned the franchise to the gates of purgatory.

In the meantime that said franchise is neither in heaven nor in hell, the people’s right to information and freedom of choice rests uneasily once again on the fulcrum of judicial probity and independence./WDJ